“Have you ever had a dream that you wanted so badly but that dream was simply not even for yourself but others? Well that is this dream.” ~Dani, owner of DCF

What is Deadly Creations Fursuits? Well if it wasn’t obvious by our name, we are Fursuits makers. Or should I say a single maker.

Where did I start? Where am I now?

My name is Dani Cattale and I am the sole owner and head seamstress of Deadly Creatiosn Fursuits. I began this business in 2017 when I got this crazy idea to try this thing out for myself. I had no idea how to do any of this nor did I know what I would do with it in the future. Originally this was going to start with, what is now our mascot, Eathron. (Eathron is a original species by myself known as the Demention and no, sadly it is not open for public use and has no intentions on being open as he is now a very special character and one-of-a-kind.) This being in 2016, I had researched very little, mostly on how to sew and make a realistic jaw set but beyond that I had nothing. It wasn’t until I created my Dutch Angel Dragon (species created and owned by Deanna Biesemeyer), RadioActive (yes it is all one word with both capital “R” and “A”). He was inspired by my very first MSPaint drawing called Toxicity which was literally just a bunch of black, purple and neon green lines. He was everything to me so I decided that he would be my very first Fursuit. 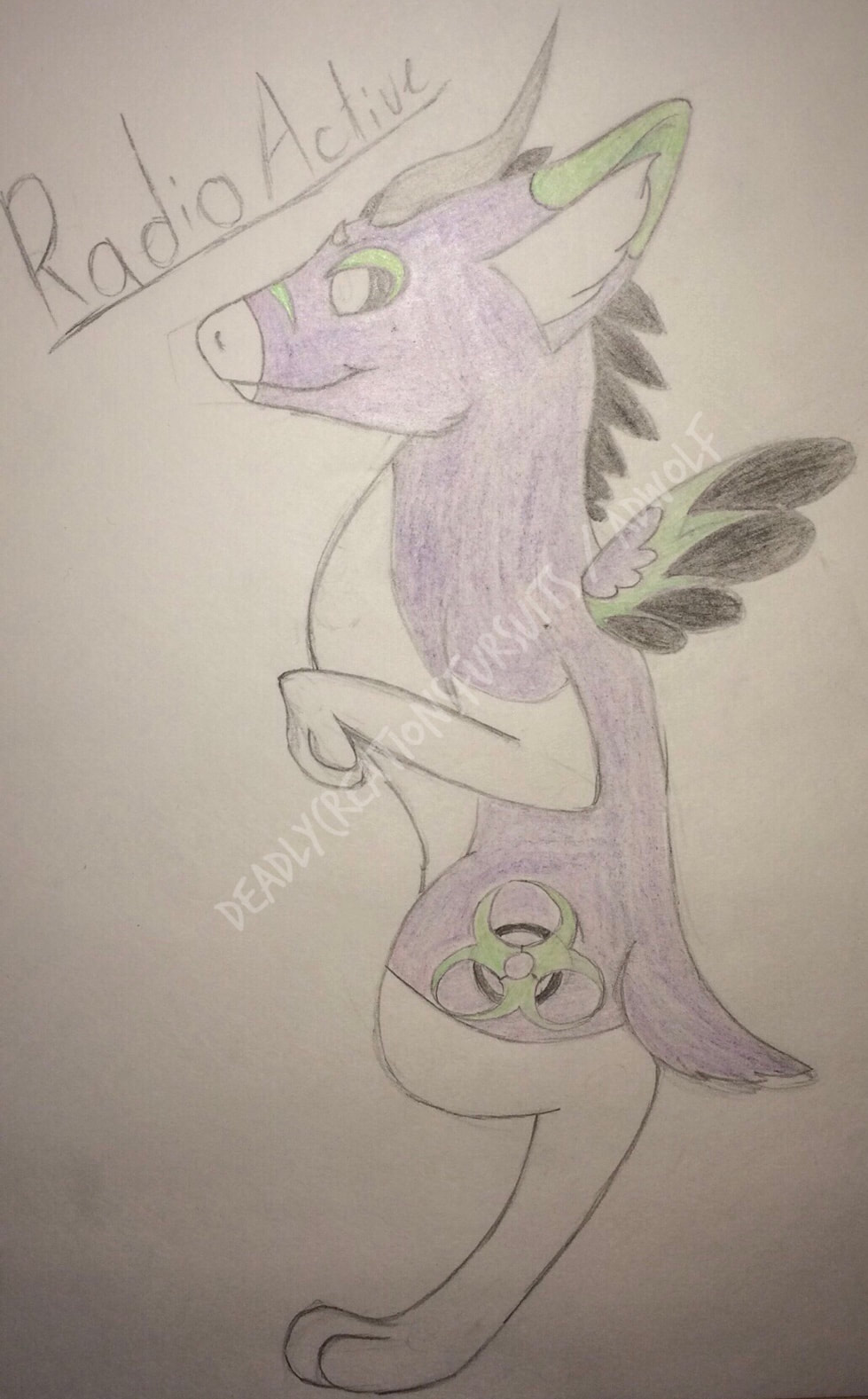 Original Drawing (December 31 2016)
Of course, I hardly had any funds so I grabbed what I could and began working in my Ceramics class. My teacher was a huge cosplayer and loved the idea as long as I finished my projects, which of course I did. I then took him home and began to slowly fur him with some cheap furs (my cheapest being Hobby Lobby white faux fur). A year flew by and in came December, RadioActive was done and he came out okay but I was unhappy with him. A lot of people loved him however which helped me a lot considering he was badly lop-sided and shaggy as anything with uneven markings and just a general new-maker look. 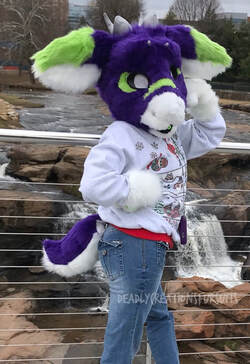 1st Outing December 24 2017
That summer in 2018 I was commissioned for a few small things including a Labrador tail that I was so happy with because I had gotten a new shaving kit for my birthday and the tail looked almost perfect other than the seam showing just a little bit. But my biggest commission yet had come in for a 5 foot tail! This tail went down 3ft and extended another 2 feet. Three shades of purple and bright green stars. The original picture was far too complicated but with some discussion I was able to create the longest tail I have ever attempted! It was amazing and not a single seam could be seen. This is when I knew I could bring Deadly Creations Fursuits somewhere.

I also remember when my closest friend, my sister, came to me trusting my ability and asking me to remake Spider. I was beyond excited and shocked that she even asked. I remember getting the head base from Dream Vison Creations back in 2017 and I remember setting him aside for months as everything was worked out and fixed in my own life. It was until October 2018 that I began working on him after doing smaller commissions and I created this semi realistic fursuit head that literally blew the old one out of the water. This was my first time ever painting on a suit and while not perfect I think he looks amazing! This is the point that I feel so extremely proud of what I was able to do and made me want to make more and forget everything else. Fursuit making is more than a hobby, more than a job, it became my passion. Any time I’m upset I begin sewing or cutting or shaving.

Finally 2018 passes and we enter into 2019. New year, new me, new products. This year so far has been amazing. I have gotten so much done including a true refurbish of my very first head. I took the exact same head base from early 2017, add a little onto it to make ventilation better and fix broken pieces and created today’s RadioActive. And can I just say that I have been so amazed at the changes just from hardly two years. 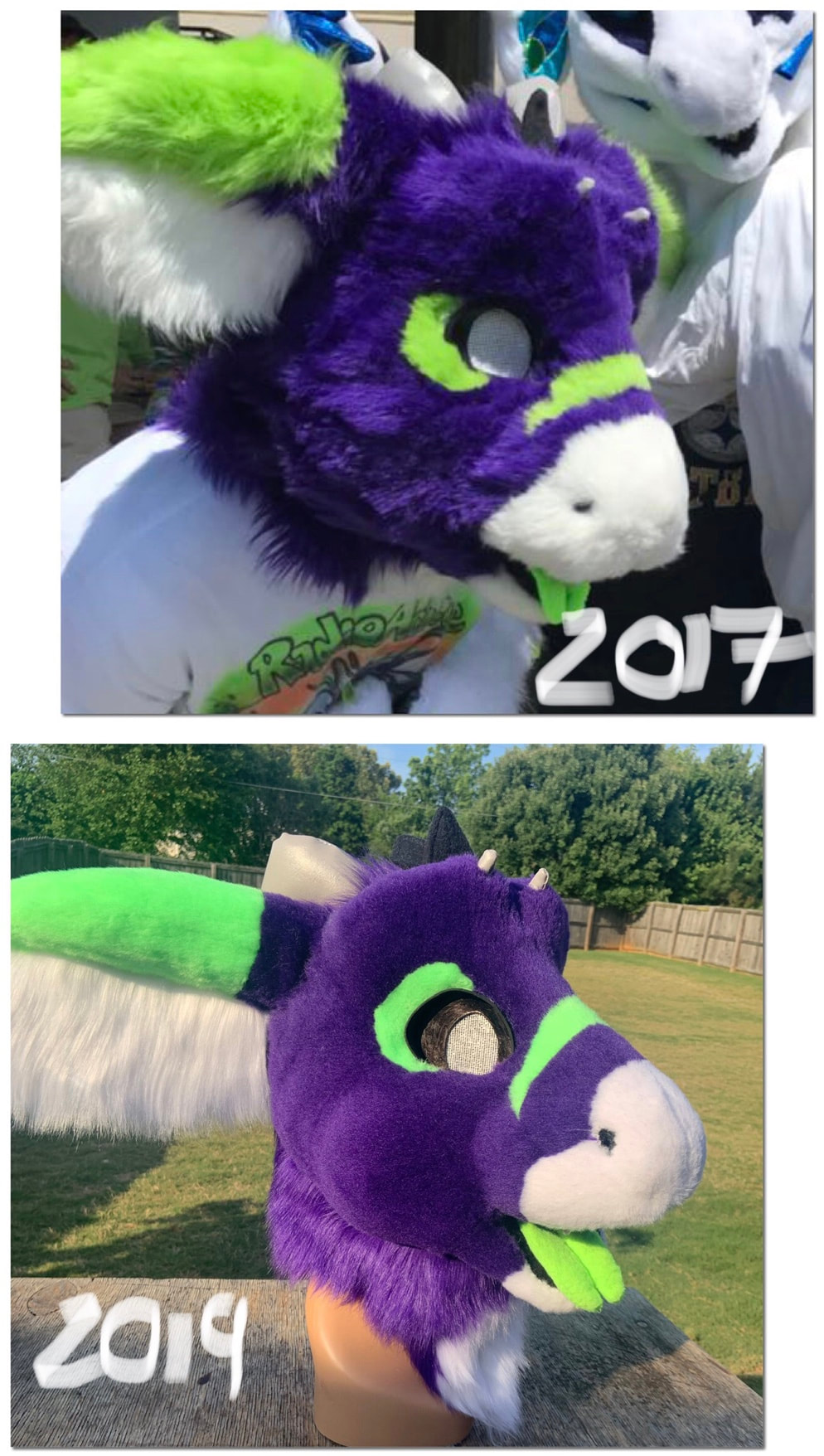 And this is where I am now, I have confidence and have proven quality and have had people ask when I am opening up again, well to be honest, it’s sooner than I even expected.

Why the name Deadly Creations? Because I’m a scary person. I love horror and gore. And I thought Deadly Creations sounded pretty cool! Then I had encountered the Canadian Deadly Creations Art and Taxidermy. While we are in different countries there was confusion with the companies due to well, exact same names. While they did originate first we agreed that I could have the name as long as I go by specifically Deadly Creations Fursuits. And they could claim art. Which is why my art signature is ADWolf and not Deadly Creations.

Our motto “where dead things come to life” actually come from the idea that we bring Creations to life. Fursuit are the “living” form of drawings. And no, the characters are not dead, but they’re not here breathing in our world either. Until we put on a suit of course. You always hear how fursits bring characters to life. So we developed out motto after that and personally a lot sticking was with the Spider Remake. Remaking him was by far the best thing that has ever come into this business.

You probably have noticed that while there is only one person behind the entire name, the use of plural pronouns is frequently used. Well this is because I don’t believe in singular pronouns when it comes to DCF, it is not me, it is me and the people who supported me while I had no hope. I do not exist to make people happy and give life to their characters. We exist to.
Saying “we” and “us” and “our” are friendly terms meaning we are not alone and we are not all about just one person even though there is only one person behind the name. I believe that the only reason I am able to sit here writing this is because of the person reading this. Not because of myself.